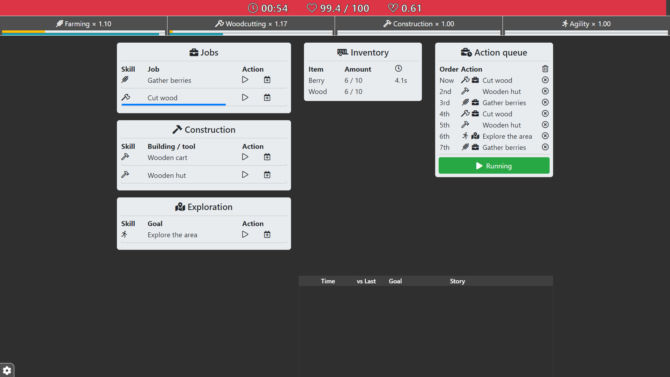 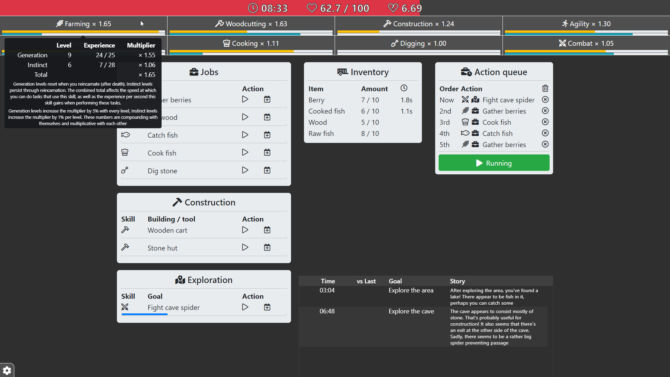 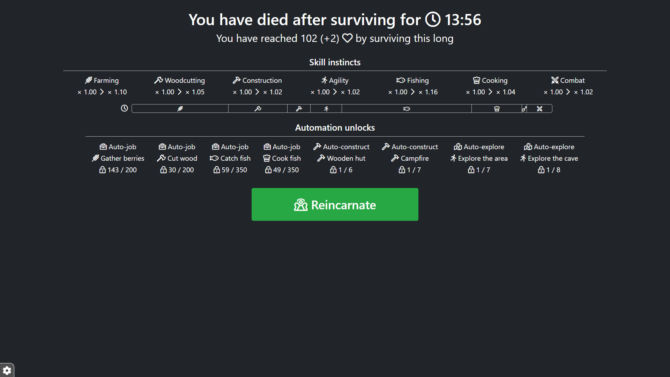 Survive the ever increasing pressure of time for as long as you can!

Increlution is a minimalistic incremental game about time management that takes inspiration from roguelite games. It’s up to you to survive as long as you can with the tools that you unlock throughout life, such as food or constructions. As time goes on, your health will decline increasingly faster until you’ll eventually die. However, death merely marks a new beginning. With every generation, your chances at survival will increase, because progress in previous lives increases your instincts.

Throughout life, you’ll have access to various jobs, constructions and explorations. Using the step-by-step queue system, you can plan exactly what you want to happen and the game will automatically follow your orders. When your queue is empty, the game pauses automatically, so you don’t lose any of your precious time! This is a game about planning and strategizing, not a game about micro-management or clicking. However, if you prefer to play more real-time, you can prioritize anything over your queue at any time.

Every action uses one of many skills, such as Farming of Woodcutting. Every skill has two leveling types, Generation levels and Instinct levels. Generation levels increase more rapidly and provide a bigger benefit throughout life. Instinct levels increase at a slower pace, but persist through death, creating a permanent improvement for every following life. The combined effect of these levels directly affects how quickly you can perform actions that use these skills, allowing you to spend more of your time on other actions to increase your chances to survive!

You progress through the game with a story. Exploring the world allows you to discover new tools to improve your chances at survival. Unlike most incremental games, having a story also means the game includes no procedural content, and you’re actually able to complete the game. That story features approximately 90 hours of unpaused content with the initial Early Access release. During Early Access, that story will be expanded significantly, until approximately 700 hours worth of unpaused content. When the story is finished entirely, a new game plus will most likely be added to offer an option to continue playing after completing the game.

Every generation will have better chances at survival than the last. The longer you survive, the more those chances will increase! This cycle of life and death plays a fundamental part in the overall progression through the game. Death is inevitable, but never pointless!

All progression within the game is carefully balanced to provide a consistent feeling of improvement, while numbers are tuned to remain understandable. Most bonuses compound, which keeps your progression consistent and meaningful, without requiring overly complicated mechanics. So you can focus on what matters most, survival!